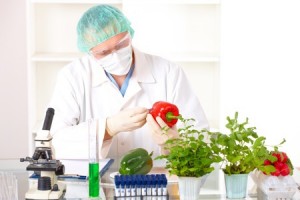 As described in the Your Health Depends on Your Gut article, intestinal dysbiosis, a disruption of microbiota in the gut in which pathogens begin to outweigh beneficial flora, is a huge contributor to our current disease epidemic. Although other factors may be involved, intestinal dysbiosis is caused primarily by antibiotics.

Recently two scientists, Anthony Samsel and Stephanie Seneff, have argued that glyphosate, the active ingredient in Monsanto’s herbicide Roundup, is yet another powerful factor in disrupting intestinal microbiota, causing intestinal dysbiosis and disease.

Although human studies are so far lacking, Samsel and Seneff present evidence for the disruption in gut bacteria by glyphosate in cattle and poultry. These studies suggest that beneficial bacteria may be more susceptible to glyphosate, thus promoting the growth of pathogenic bacteria.

Glyphosate gets into the root system of plants, so you can’t wash it off. When you eat one of these plants the glyphosate winds up in your gut.

According to anti-GMO activist and expert Jeffrey M. Smith, more than 30% of all herbicides in the world today contain glyphosate, which was first introduced as an herbicide in 1974. In 1996, Monsanto began developing plants that were genetically modified (GM) to withstand glyphosate, the so-called “Roundup Ready” plants. These plants now comprise more than 80% of all GM plants and include soy, corn, cotton, canola, sugar beets and alfalfa. As herbicide resistance has developed, necessitating the use of more and more glyphosate, more and more of it gets into food eaten by humans and farm animals. (Contrary to industry claims that GM crops reduce pesticide use, Charles M. Benbrook, research professor at the Center for Sustaining Agriculture and Natural Resources at Washington State University, found that herbicide-resistant superweed growth necessitated using 527 million pounds more herbicide between 1996 and 2011 than would have been used had only non-GM crops been planted.)

Until we can get rid of this dangerous technology, you can avoid GMOs and glyphosate by choosing foods that are certified organic or are Non-GMO Project Verified (the label with the monarch butterfly). Certified animal proteins must come from animals fed a non-GMO diet.