. . . PLP, the bioactive form of vitamin B6, can make a world of difference If all it did was support methylation, vitamin B6 would be a very valuable nutrient. But it does a lot more. It’s a “neuronutrient” that feeds the brain and nervous system and is used to make important neurotransmitters. It is needed in blood sugar regulation and protects against glycation reactions. It’s an antioxidant and anti-inflammatory that supports immunity. It’s used in the synthesis of CoQ10. It’s helpful in preventing and treating allergies, arthritis, asthma, cancer, heart disease, edema, food cravings, PMS, ADHD, carpal tunnel syndrome and kidney disease. A recent review of 9 different studies in the Journal of the American Medical Association concluded that having high levels of vitamin B6’s active form, PLP, in your blood (130-140 pmol/ml) could reduce your risk of colon cancer by 49%. However vitamin B6 can’t do any of these good things unless it’s converted into its bioactive 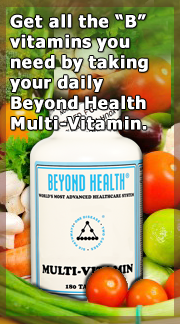 form, pyridoxal phosphate (PLP), also called pyridoxal-5-phosphate (P5P). Unfortunately many people have trouble making this conversion. They may be taking plenty of B6, but when measured, they don’t have adequate PLP levels in their blood. One of the things that make Beyond Health supplements so special and effective is that we include bioactive forms of nutrients in a very pure form in our supplement products. Bioactive forms like PLP are ready for immediate use, while most nutrients from food and supplements need to go through several biochemical reactions in the body before they can be utilized. For these reactions to occur properly, enough energy must be available. The right enzymes and cofactors (other nutrients) have to be there too, and toxins that could potentially interfere with the process have to be minimized or eliminated. These factors are hardly ever optimal. Many times the right enzymes aren’t available, or aren’t available in sufficient quantities, often due to genetic differences and the effects of toxins. You can also be experiencing low energy or lack cofactor nutrients for any one of a number of reasons. As for toxins getting in the way, no matter how proactive you are, they are unavoidable and often unpredictable. Chronic and acute infections can also interfere. What all of this adds up to is that you can give your body a major break by supplying it with nutrients that are already in a bioactive form. In the Beyond Health Multi, a daily serving of two tablets supplies 20 mg of PLP plus 80 mg of pyridoxine HCl (a PLP precursor). Our B12/Folate provides 5 mg of PLP. (One problem with bioactive forms is that they tend to have a short half-life. So we supply precursor forms of the nutrient too. The body will use up the bioactive form first, and if it needs more, it will draw upon the precursor form.) The bottom line is, because we formulate our supplements with such care and attention to detail, they work better! In fact they can make a world of difference in your health.