. . . B12 shots for the elderly used to be standard medical practice Neurological symptoms of vitamin B12 deficiency range from the subtle to the disabling and include confusion and lack of mental clarity, poor memory, insomnia, nervousness, weakness, fatigue, imbalance, anxiety, depression, tremors, incontinence and dementia. Unfortunately, medications are usually given to suppress these symptoms, masking the deficiency. If caught early, symptoms of B12 deficiency can be reversed, but if the deficiency is masked and thus allowed to continue, irreversible paralysis, dementia and brain damage can occur. Preventing vitamin B12 deficiency is of course the best course, yet even blood tests 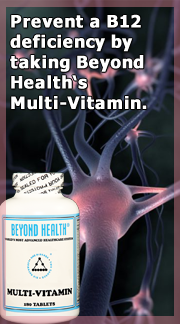 revealing low B12 are often disregarded by doctors. A 2000 government sponsored study found almost 40% of the population low on B12. Vegetarians and the elderly are at particular risk. Studies cited by Dr. Russell Blaylock found almost half of the “healthy” elderly and 80% of those requiring full care significantly B12 deficient. Blaylock also notes that before 1960 there were very few cases of Alzheimer’s dementia, whereas after that year cases of dementia grew exponentially and are epidemic today. One significant factor that changed is that the elderly used to get regular B12 shots, at least every year if not monthly. Blaylock credits “the evidence-based medical elite” for deciding there was no “evidence” for this traditional practice and getting it discontinued. For most people, taking two tablets of our Beyond Health Multi daily is the best possible insurance you can get to prevent B12 deficiency. However, if you are over age fifty, I recommend you take one sublingual tablet of our B12/Folate formulation daily for extra protection and extra energy. If you suffer from any kind of brain, neurological or neuromuscular problem, you may need even more B12/Folate protection.