. . . It's not nice to fool Mother Nature! Elizabeth Plourde, PhD, author of the book Sunscreens – Biohazard: Treat as Hazardous Waste, is on a campaign to expose the truth about sunscreens. Touted for protecting against cancer and photoaging (sun damage to skin), sunscreens, says Plourde, do the exact opposite. Since the introduction of sunscreens, the number of annual skin cancers has greatly increased, and damage done by sunscreens encourages the fine lines and wrinkles, sagging and loss of tone, dryness, and roughness that characterize skin aging. It’s not that radiation from the sun can’t potentially cause both cancer and photoaging. These can both be caused by the sun’s rays creating free radicals in the skin. But from time immemorial, Mother Nature has had that covered. Antioxidants protect against free radical 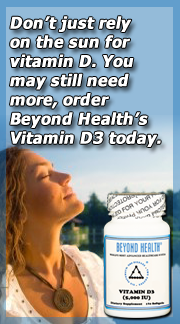 damage, and Mother Nature has provided us with plenty of antioxidant-rich fruits and vegetables to consume. She’s also arranged for the sun’s rays to stimulate the conversion of cholesterol in the skin into the antioxidant vitamin D. These same rays stimulate the skin to produce melanin, a brown pigment that gives us a tan and absorbs and protects our skin from the sun’s radiation. Mother Nature also lets us know when our antioxidant level and/or tan are not sufficient to protect us – our skin begins to turn pink, telling us we need to get out of the sun NOW or risk a painful sunburn. Sunscreens completely thwart Mother Nature’s design. By blocking both ultraviolet B (UVB) and more recently ultraviolet A (UVA) rays, they prevent us from tanning. By blocking UVB, they block the synthesis of vitamin D. Preventing vitamin D synthesis alone has contributed to widespread vitamin D deficiency, leading to increased cancer rates as well as increased rates of just about every disease imaginable. By preventing sunburn, sunscreens also allow us to stay out in the sun way past the point where our antioxidant reserves have become depleted. Why would this be a problem? Well, whereas sunscreens block free radical damage from UVA and UVB, as Plourde points out, UVA and UVB account for only 4% of the sun’s rays. Near infrared rays (NIR) account for about 47%, and they continue to do their free radical damage – causing cancer and aging skin – even though you don’t burn. In fact, of all the sun’s rays, NIR do the most damage because they penetrate the deepest – getting right into the cells and the cells’ mitochondria.  Chemists are currently working on ways to block NIR in sunscreens. But thwarting Mother Nature’s design is only one way in which sunscreens do their damage. Chemicals used in sunscreens are toxic, and as sunscreen formulas become more complex, blocking UVA and now potentially NIR, more toxic chemicals are added. Although harmful enough individually (many are known endocrine disruptors), no tests have been done on how they affect the body when used together. We know, however, that combining chemicals can greatly amplify toxicity. Also nanotechnology is now being used. For starters, this technology involves introducing the toxic heavy metal aluminum into sunscreens. But the true horror of nanoparticles in the human body and in the environment is just beginning to be explored and revealed. Plourde presents plenty of evidence to suggest that this dangerous technology may be the next big scandal after genetic engineering. It’s not nice to fool Mother Nature, and we are paying a heavy price in disease and aging skin for using sunscreens. Even our wildlife, especially sea life, is suffering, since sunscreen chemicals get into our waterways causing reproductive problems and other disease. Fortunately, there’s a better way – read on!

Plourde E. The false promises of sunscreens: the real consequences of their use, Part 2. Townsend Letter. August/September 2012, pp. 101-104